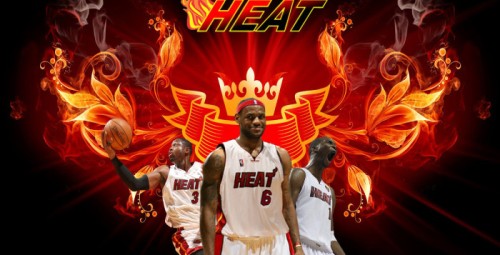 The Three-peat. It’s the holy grail of the NBA and an accomplishment exceedingly more difficult than it sounds.  And it sounds pretty damn difficult.

It’s nigh on 11 years and counting since the Diesel-powered Lakers crushed the Nets to complete the NBA’s last  triplet of titles, so what of the chances of this 2013/2014 Miami Heat team?

A squad which has emerged from unparalleled derision (albeit utterly self-inflicted) , and a 2011 Finals capitulation without which they may have been prepping that third banner already (taking nothing away from the brilliance of one Kaiser Nowitzki), to back-to back NBA Championships and the exoneration  of one of the most polarising players in the league’s history. Mettle has been proven, multiple Game 7s conquered, but just how far is that final hurdle to the legendary status which automatically accompanies three straight Larry O’Brien’s?

A once diluted Eastern Conference is now the strongest it’s been in years, and although it lacks the depth of its Western cohorts, it’s at the top where it really matters, and that’s where things are (suddenly) rather heavy.

The Indiana Pacers, who pushed Miami to the absolute brink last season (perhaps merely an ill-advised Hibbert benching from the NBA Finals), have had an exceptional off-season, Larry Legend finally adding some bench depth in the form of Luis Scola, Chris Copeland, and CJ Watson. Add to those pieces the return of former All Star Danny Granger, the continued gaudy ascent to superstardom of Paul George, and another year of deep playoff experience to the wily Coach Vogel, and you have yourself a legitimate Eastern Conference Champion in the waiting. All this with barely a mention of Mr Roy Hibbert, who after being persecuted through the first half of the regular season, stuck the proverbial thorn in the side of the Heat, terrorising the interior and just generally being awesome at being a seven footer. The man was a walking embodiment of Heat Kryptonite, and will be frothing at the prospect of going at least one step further.

Everybody’s favourite Russian magnate, Mikhail Prokhorov, has boldly pushed forth his Brooklyn Nets’ sizeable stack, going all in for the upcoming season. In what some would call a shameless shot at short-term glory, he’s extracted the cream of the 2008 (note, 2008) Boston Celtics Championship team in Paul Pierce and Kevin Garnett, and lured his compatriot Andrei Kirilenko with the promise of a Harem and a paltry million or two on the side. Combined with the existing triumvirate of Williams/Lopez/Johnson, and a rookie coach coming fresh off his own 22 game score-free streak, it makes for a compelling team, but undoubtedly one of the strongest starting line ups in the league.

But it’s in the Windy City where Miami’s greatest challenge will likely arise. After riding nothing but a Nate Robinson hot streak and the most hard-nosed of defences to the Eastern Conference Semi Finals, it’s difficult to quantify just how much better this Chicago Bulls side will be after ‘The Return’ of Derrick Rose from his lengthy rehab stint. Rose has dispelled any notion that we may see a less explosive, more tentative version of himself with some stellar pre-season play, displaying all of that trademark pogo athleticism, and even a more consistent three point shot.  He bore the brunt of considerable criticism with his cautious approach to rehabilitation, but early results speak for themselves. Also, have we even seen what he’s capable of with a legitimate option at shooting guard of which he now has in draft night robbery – Jimmy Butler?

There’s no shortage of squads with the firepower to take that throne from the Heat (and I’ve only covered the race in the East) however the internal challenges lingering in the Heat camp are almost equally significant, and at the top of that list….health.

It has to be noted that, since the ‘Big Three Era’, Miami has managed to remain relatively injury-free, save for one near-catastrophic abdominal tear in the 2012 Eastern Conference Semis to lone effective big, Chris Bosh. Those were uncertain times at best, and CB1 left gaping weaknesses inside which were effectively exploited by the Pacers and (to a lesser extent) the Celtics.

You could dismiss that as but a blip on the radar, but the fact remains that Dwyane Wade, despite continued assurances otherwise, is operating on knees that would make Vince Carter wince. Bone bruises, deep tissue damage, strains, tendinitis, arthritis; only a Pete Doherty-esque cocktail of pre-game drugs (including shock treatment) prevented him from completely breaking down during the 2012 run, and it became even more pronounced during the 2013 Playoff stretch. Wade would go missing for large chunks of games, stranded in that no man’s land of attempting to be effective and accepting that just maybe, you may not be able to be.

It’s a testament to his mental strength and will to win that he’s come this far, and a throwback Game Seven performance against the Spurs – which set the platform for Heat victory – proves that he still has the skillset to compete at the most elite of levels. Perhaps a combination of prolonged rest during the off-season, shock treatment, and the re-introduction of guru trainer Tim Grover may be the antidote to squeezing at least one more deep playoff run out of those knees.

One thing is certain, Wade can’t continue to subject his body to the kind of reckless punishment he did as a wiry ball of energy fresh out of Marquette. The most prudent course of action has to be a re-invention of sorts. Not so many flailing forays to the rack punctuated by thuds to the hardwood, and more of the mid-range money- in-the-bank and use of the size advantage he has over most of his fellow shooting guards to back up and employ that lethal post-up game.  It’s as much a mental barrier as anything else, coming to accept that he’s no longer ‘Flash’.

Having said all that, Wade has looked spry in pre-season, and talk from within the camp of a renewed energy in his game bodes well.  Few players hold a grudge like Wade does, and he’s certain to carry the chip born of the stinging criticism of his play through last year’s playoffs (where he posted career low numbers in points, rebounds, and FG%) firmly on his shoulder throughout this season.

He could do worse than looking to now ex-team mate Mike Miller for inspiration, whose own knees have both been to Nam and back and deserve their own Purple Heart after the cameos he’s rung out of them. Unfortunately, The Don Pat Riley has called time and forced Miller and his array of haphazard prison tattoos back into Free Agency, only to be regathered by his old chums in Memphis.  Although his regular season statistics were modest at best, his ability to provide those intangibles and step up at opportune times to rain game-sealing/stealing threes (16/36 at 44.4% in ‘12/’13 Playoffs) will certainly be missed.

It’s hard to argue with Riley’s reasoning to invoke the amnesty clause on Miller, and it’s indirectly opened the door to two hugely intriguing off-season signings in Greg Oden and Michael Beasley.

Rehab projects don’t come much bigger than this (literally), and Oden is generously listed at 50% health after THREE YEARS without a solitary NBA game. Heat staff are doing their best to downplay his match fitness in order to lower expectations, but there’s no mistaking the impact he would have, even at just 75%. It’s apparent that the most direct path to defeating Miami is by overwhelming them in the low-post, and if they were able to squeeze 20 minutes per game out of Oden it could go a long way towards winning number three. The Heat hasn’t had a legitimate post-scoring option since Shaq and Alonzo, and that coupled with his shot-blocking prowess would be of immeasurable worth. Never will you see a more cherished two points and two rebounds of pre-season basketball like those we recently saw from Oden, and it was patently obvious from those Heat bench reactions that they’re aware just how much value he could add to the Heat rotation.

Of course this is a near best-case scenario, and considering Oden has played a paltry 82 games since being drafted in 2007, it’s going to take a serious amount of work to get back to legitimate health and production.  It’s almost just as likely that he goes the Brandon Roy comeback route, plays 0.5 games and then fades back into obscurity. But there won’t be any shortage of motivation, the burden of being labelled ‘Sam Bowie 2.0’ can’t be an easy one to bear.

The same can’t be said for Florida Springs Rehab centre inductee #2, Michael Beasley, whose lack of motivation and off-court antics have contributed to back-to-back grim seasons littered with poor decision-making on and off the court. He bottomed out last season with Phoenix, shooting barely 40% from the field, resulting in a career low 10.1 points per game. That combined with an assortment of questionable decision-making behind (or in some cases, not so much) the scenes resulted in a plummeting in value and a demoralising waive by Suns management.

It’s a not a question of physical, but mental health for Beasley.  There is no denying he has the tools to succeed in the NBA (19.2 ppg/5.1 rpg in 2010/11), the everlasting question is how willing he is to apply himself to the craft. Returning to the team that drafted him and a positive, winning environment surrounded by proven veterans coming off a championship season, AND a reunion with former mentor Dwyane Wade….if he can’t make it work with this equation,  it’s never going to happen.  If  he does manage to right the ship, it would add serious offensive depth to a bench short on the type of just-add-water scoring that is so chic in today’s league, as well as a more legitimate back-up option for LeBron.

But perhaps the above is simply analysis for the sake of analysis. Ultimately, the success or failure of this season rests on the shoulders of LeBron James. This Heat team will go as far as he can take them, and if history is anything to go by, the greatest basketball force on the planet is going to be even more of a force this season, which is almost difficult to comprehend.  In his minimal pre-season outings so far he’s already showcased a more fluid fadeaway jumper from 18 feet, both elbow and baseline, perhaps another weapon added to an ever-expanding arsenal.   With the demons of 2009 and 2010 now twice exorcised, the proposition of defeating LBJ will be more daunting than ever.

It’s also probably safe to say that never before has a team coming off back-to-back Championship seasons had more pressure on them to win a third, and it’s a predicament for which this Heat squad only have themselves to blame. Sports fans have long memories, and the stink of that shameless prancing of Heatapalooza in 2010 will linger for as long as they aren’t winning rings. Anything less than #1 will always be deemed a failure, no more so than in their own eyes.

That in itself may be all the motivation the Heat needs.

Stephen Foote
Stephen is a hopeless NBA addict, shameless Heat sympathiser, and Fantasy Ball fiend. For all Basketball banter, and a host of other non-sensical musings, follow him at @aotearaw

Reflections from the Word of God

Awhi. To nurture. To want what is best or right.

Welcome to the world of fun,a place where your opinions count.

thoughts from my struggles, and delights

CNN Belief Blog
Been There, Blogged That

Flirtations with Travel, Experiments with Words

The Story of Writing